Is There a Nurse in the House? 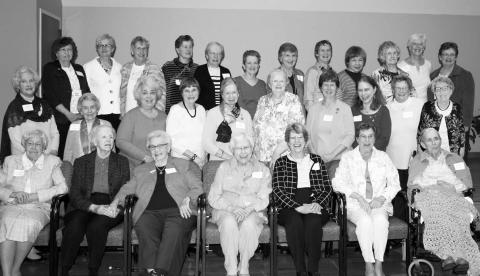 Nurses are one of the largest group of retirees at Carol Woods. Thirty-five have been identified as current residents, and another five are either Early Acceptance or are on the Priority List. On May 6, they celebrated National Nurses Day at a dinner in the Carolina Room followed by a movie, North Carolina Nurses: A Century of Caring.

A questionnaire sent to these retirees turned up
some interesting facts:

• The 37 respondents who reported their years in nursing put in 1159 years either in a clinical setting or
a university. The average tenure was 30.5 years.

• Four retired as Colonels in the US. Army – Martha Bell, Diane Corcoran, Amie Modigh and Sandy Venegoni. Both Amie and Sandy were sent to Walter Reed Army Hospital during Operation Desert Storm where Amie was the Chief Nurse.

• Jessie McIntyre served as a First Lieutenant with an evacuation unit in Europe during WWII. When the war ended on May 8, 1945, her evacuation unit was sent to provide care at Mauthausen concentration camp in Austria.

• Both Audrey Booth and Clara Cazzulino were in the Cadet Nurse Corps graduating in 1948.