Residents' Perspectives on Adjusting to Life At Carol Woods 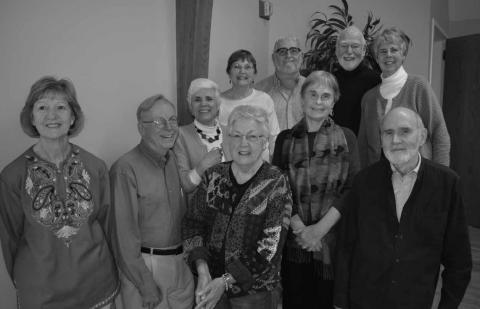 When resident Jan D. suggested writing about adjusting to Carol Woods, it sounded like a wonderful idea to include a wide range of newcomers. So, we invited seven who had been here between three and 30 months. Most of these residents knew well in advance that they wanted to come to Carol Woods and had had their names on the Priority List for years.

Jan, herself, was probably the one who put the most thought beforehand into how she would adjust. A friend had told her it would take three years to settle into such a major move. So, she approached the transition in three segments. She feels as if her first year was simply a year of “coping” and figuring out a routine that best fit with her personal needs and activities. Although she didn’t get to any Newcomer Orientation sessions until her second year, she had already become co-chair of the Housekeeping Committee.

And speaking of involvement, during Jan’s second year she became a member of four additional committees and started two special interest groups. Now into her third year, she has backed off from some of her activities and has added less-structured things such as swimming, walking Harkness Circle and playing a weekly game of bridge.

Although many of the new residents are advised to take it slow when it comes to getting involved in too many activities, some do not heed that advice. Their names began cropping up on Carol Woods Advisory Committees, Service Committees and Special Interest Groups.

Barb and Nick D. probably had the shortest time to wait before coming to Carol Woods among the new residents interviewed. With a home base in Tucson, they spent more than half of each year traveling the country in their RV. In November 2012, they were headed to Myrtle Beach to spend the winter. They stopped in Chapel Hill, saw an ad for Carol Woods on UNC-TV, met with Gretchen the following day and signed on to the Priority List expecting a two to five year wait.

Three months later, Gretchen called to say there was a one-bedroom cottage available and they could have it. They moved in September 2013. But they were not ones to wait and see what the community had to offer them. By this time, between them, they are participating in nine committees or special interest groups. Barb said being part of the Carol Woods community means getting involved!

Toby and Katherine S. started out as Early Acceptance residents and “began to pay attention to what goes on at Carol Woods.” They attended concerts, Residents Association meetings, art openings and an occasional meal. (When former Metropolitan opera soprano Marisa Galvany gave a performance during the Summer Festival 2014, Katherine actually joined with her in a song.) Toby and their dog Cody are often seen early in the morning walking through what he refers to as “downtown” Carol Woods (AKA, the main building).

If the DeLucas described their move as “serendipity,” Peg and Phil R. are on the other end of the spectrum. They had lived in Chapel Hill for 43 years and had long planned to come to Carol Woods. They have retained their church, friends, favorite stores and health care providers. They report their biggest adjustment is getting to places from the north rather than the south end of Chapel Hill. One of their real delights is the fact that their cottage had once belonged to a friend and they were able to bring plants from their Chapel Hill home and add them to her wildflower garden. Phil had to give up his basement workshop, but has transferred his projects to the Krusa Craft Shop.

Anne F. also spent over 40 years in Chapel Hill and feels the hardest part of her move to Carol Woods happened before she came. She was leaving the only home her children had known. Although she misses her beautiful yard and her deck overlooking New Hope Creek, she believes the security of being at Carol Woods outweighs all those losses. As the holidays approached, she wondered if her home would be the anchor of the holiday feast for her family. Could she find the turkey forks? Would the holiday celebrations shift to one of her children’s homes? Uncertainties to be sure, but security as well.

Barry and Ruth W. are the newest residents in our cohort and, as she reports, they moved in during July, August, September and October. Gail M., the Mentor Coordinator for Building 1, kept putting up their welcome sign on all three floors and taking it down when they went to their home in the mountains each month. Ruth even sailed down the Rhine with their daughter in August. They finally completed their move on Columbus Day and then had less than a week to get ready for a friend’s visit from London. Their daughter was the one who had encouraged their move.

Now having been here less than two months, they decided to make a list of all the positive aspects of Carol Woods. They came up with 20 items which included cuisine number 1 and also number 20 because they had forgotten that they had already listed it first.

Anne F.’s last paragraph sums up her thoughts about Carol Woods. “Everyone I’ve talked to here is very glad they are here and really loves living here. Life isn’t a rose garden at any time in life, but aging seems to require more navigating around the thorns and also the ability to enjoy the roses.” Carol Woods offers a fertile garden.

Compiled and edited by Carol Woods Resident Sindy B.