No Car — No Problem 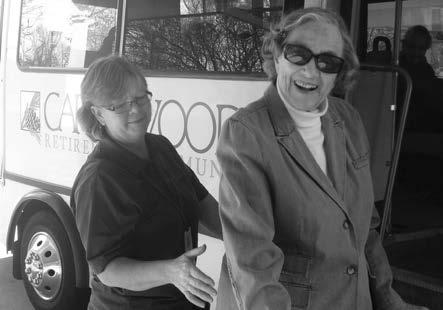 “I was always a little snobbish about taking a bus. I wanted to drive.” This statement by Lois Ann H. probably strikes a chord for many Carol Woods Residents. But the day came when an injury forced Lois Ann to give up her wheels. A difficult transition? Not really. Because Lori K., the Carol Woods bus driver, believes her job is to help residents make this transition as smoothly as possible. Lois Ann has found that the “regulars” on the bus have developed a camaraderie that makes up for whatever independence has been lost.

Five days a week Lori makes two morning and one afternoon trip to shopping centers, hair dressers, grocery stores, the library or anywhere riders want to go in the Chapel Hill-Carrboro area. She drops them off at their destination and returns to take them home. She meets independent living residents in the lobby and then picks up those in assisted living who have signed up for the trip. Occasionally she has only one passenger who gets chauffeur service, but usually there are somewhere between three and twelve on the 14 passenger bus. Twice a month the afternoon trip is to one of the shopping malls in Durham. The bus schedule is always available at the front desk.

Lori’s path to bus driver extraordinaire was circuitous. With a degree in horticulture she hoped to work for Duke Gardens but discovered bus drivers on the campus earned twice as much as the gardeners. She became the driver for a Duke mobile dental van that visited schools, a job she loved but which ended when the three-year grant expired.