Gardening in a Retirement Community by Marian Stephenson 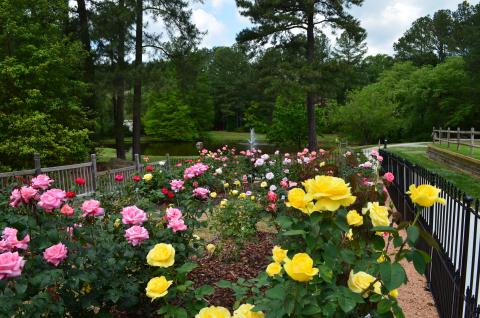 “Can you have a garden there”?”  I smile when my gardening friends, still in their homes in town, ask tentatively about what is “allowed” at Carol Woods. For those not familiar with CCRCs – Continuing Care Retirement Communities – let me explain.  When we move to Carol Woods into a cottage or an apartment, we live much as we have in our previous homes.  If, in time, we need support in doing some daily things like remembering to take medications, we have assisted living areas to move into – while still being active in the larger community but with support.  Eventually, if needed, the health center provides both long term care and skilled nursing care. Since many residents live healthy and active lives well into their 90s, there is a lot of creative time to enjoy growing plants and making gardens.

Carol Woods has many resident-adopted spaces as well as many public gardens which are maintained by staff.  An “adopted space” concept allows one to personalize the adopted space and tend to it as you wish, but with assistance from staff for a modest fee when you want or need help.  Some of the resident gardens are ‘pocket gardens’ – small corner spaces at junctions of entry sidewalk to main walkways.

Others are created at the edge of woods which are behind all cottages for privacy screening.  Many residents have small front entry gardens and those who live in an end unit of a duplex or triplex, enjoy the bonus of side gardening space as well.

Some have neighbors who are happy to offer their space for expansion.  In this article I will offer a look at gardens residents have created (including two of mine), some of our public gardens, then mention gardening opportunities for those who want to venture further out.

Before my husband and I made the decision to move to a CCRC many years ago, I contacted the grounds manager to ask if I could meet him to discuss my options for creating a garden when I moved in.  I’m happy to report that having your own garden(s) at Carol Woods is not only possible, but also encouraged and supported by the Grounds and Landscaping staff.

Since we’d been told it would be several years before we came to the top of the list, I had plenty of time to consider what I wanted to take from my town garden. As we got nearer to move-in, I began building, in a shady holding area behind the house, a collection of favorite plants to take with me. In addition to the 10 year-old dwarf Japanese maple in a half whiskey barrel that would travel easily, I potted up seedlings from two favorite large Japanese maples.  When we got the call that a cottage was available, we prepared to move to the Lower Loop #205.  It was an end unit with garden space on three sides and the edge of the woods. I recall having a total of 37 potted plants plus several trays of Cyclamen hederifoliium, which were dear to me because I germinated the seeds on my dining room table. The largest was a cryptomeria – a cutting taken from the JCRA in a propagation class with retired NCSU faculty, Frank Blasich.  Good friend, Elsa Liner generously offered her SUV for moving many of the smaller pots.

As I began drafting a design for the spaces, I kept in mind a commitment to myself that this future garden should really be low maintenance. Having left a large garden with many perennials, I knew the hours needed to keep it beautiful.  Acknowledging my age, 68, and respecting the aging process helped me stay the course. So, initially I limited myself to trees, my lifted “favorites” and bulbs. That worked for about a year and a half.

In 2016, I moved into a smaller cottage # 169, also an end unit, which offered new challenges. The biggest and most persistent was the nandina “grove” that dominated the front corner and side of the cottage.  After 3 1/2 years of regular spraying, painting cut ends and finally digging out by young staff, I feel it is mostly gone.  Last fall I was able to put in some shrubs which will screen the HVAC at the house corner. That was the last significant planting for the side garden.

Having a smaller garden space, I stayed with the tried and true plants that I am fond of.  The side garden has an east to southeast exposure and is anchored on the south end by a mature gardenia, pruned yearly to tame its size.  This garden is home to Hellebore sternii and Helleborus x lemonnier 'Madame Lemonnier', Japanese painted ferns, a large clump of white-margined rohdea, Autumn fern, Hosta “Lemon Lime”, primulas, bloodroot, Epimedium brachyrrhizum, Epimedium sulphureum, Arum italicum, Stachys officinalis ‘Hummelo’, Illicium “Florida Sunshine’, Spigelia marilandica, Cyclamen hederifolium and C. coum with a bit of dwarf mondo grass between stepping stones.  It is a bit crowded in some areas, but I have kept a spot or two for seedlings of Arisaema sikkokianum.

It is the view from my study that I enjoy the most since I spend so much time there.  It is a 5’ x 7’ greenhouse attached to the side of my living room by folks who lived here previously. Being able to see daily surprises as newly opening blooms appear throughout the year is one of “my favorite things”, to quote a well known lyric.

For the back of the cottage, I had soil delivered to enlarge the planting area to ~ 8’ by 12’. Three camellias, one sasanqua and two hybrids, provide the structure.  Two hydrangea cuttings from the 205 garden, one brilliant orange daylily from a trip to Andre Viette’s nursery years ago, one Buddleia ‘Ice Chip’, another “Big Red’ peony from John Elsey, two grasses (on their way out this year) have filled the gap. Iris tectorum, both blue and white, edge half of the border.

To define the edge of the woods behind my cottage, I had topsoil delivered and a few nice stones. I formed a small berm to create drainage since the areas was a low lying damp area.  I celebrated my 80th birthday by planting 8 shrubs in the berm and was quite pleased with myself to be able to do it.  There are two Osmanthus ’Goshiki’, mahonias ’Winter Sun’ and M. ‘Marvel’, Physocarpus opulifolius ’Coopertino’, Virbunum ‘Snowball’ and a Distyllium ‘ Emerald Green’ which  needs much more sun. To fill in I’ve added among a lot of hellebores, epimediums, ferns and bulbs. This bed still needs more color so I’ll focus on that this spring.

Other residents are gardeners too. Two former Piedmont chapter members are here.   Barbara G. spent many hours and days clearing out space in her back woods to make a series of paths through her woodland garden, which is also home to some of the art she and her husband have collected. Gail S. has transformed her small back deck into a container garden, with pots at different levels and blooming things all summer.  Cindy F. took advantage of the retaining wall behind her cottage to make a nicely designed area and filled a picket in the wall with blooming things.  Mike S. loves flowers as you can see from his front summer garden.

CW is considered unique in one particular respect.  Since its beginning, activities have been resident-initiated and resident-driven. With no activities director here (ever), we form groups of like-minded folks with shared interests to become service committees or special interest groups to provide purpose, meaningful and entertainment. Opportunities to garden here are varied.

We have a Farmers’ Garden, a fence-enclosed area of 56 plots, each 9’ by 9’ which are available for annual rental of $3.00 per plot!  Residents tend to keep the same plot for several years and improve the soil each year. Some of the crops are asparagus, blackberries, peonies, heirloom iris, snow peas, tomatoes and many annuals and favorite perennials.  A nearby shed houses tools for farmers to use there and to borrow for home use too.

The Rotation Garden came years later after the soil in the Farmers’ Garden became unable to support bountiful tomato crops. The 10’ rows are rotated every 3 – 4 years preventing fungal and bacterial build-up, allowing soil recovery time. A new row is assigned each year in a different location.  Tomatoes are the most grown crop in this garden.

The Rose Garden, endowed by a former resident, is a display garden of 36 varieties of hybrid roses, three of each type, which the Rose Volunteers (following a brief training program) take care of.  They also cut roses for the Flower Committee to use to make small bouquets for residents in the Health Center.

There are several areas devoted to native plants and last year, the staff planted trial beds of 3 wildflower mixes to see which would do the best to support the bees in our 4 bee boxes. We just received a proposal from a couple who will move in in May to develop a new native garden in a natural near an apartment building.

We also have one greenhouse in which we winter over house plants and tender plants lifted from cottage gardens.

In 2007, I put out an invitation to residents who might want to participate in tidying of the grounds.  Thirteen folks showed up and we became the Garden Go-fers.  Working Monday mornings, we began cleaning up overgrown vines and doing much needed pruning.  In the early days, we tackled bamboo, wisteria, greenbriar, honeysuckle and Boston ivy.  We still work every Monday mornings when the weather permits.

Thirteen years later, now older, we limit ourselves primarily to maintaining public gardens: the front entrance garden, board room garden, perennial beds outside of an assisted living building and the blue heron terrace garden. And, 13 year later, I am still the “organizing gofer,” since all enjoy doing the work but no one else wants to plan it.

Since I’m writing this for a rock gardening group, I must mention ,we have lovely large rocks here, massive stones really, and there is much potential for creation of rock gardens.  I suppose we’ll have to wait until someone passionate about making one moves here to see this potential fulfilled.

Until then, just for your sense of humor, I’m sharing these painted rocks which show up from time to time, placed by a mysterious person or persons.  It does bring a smile...

I hope this article does reassure those who are considering retiring to a CCRC that you can continue to enjoy your plants and garden for a very long time.

This article was featured in the Trillium, a newsletter for the Piedmont chapter of the North American Rock Garden Society.