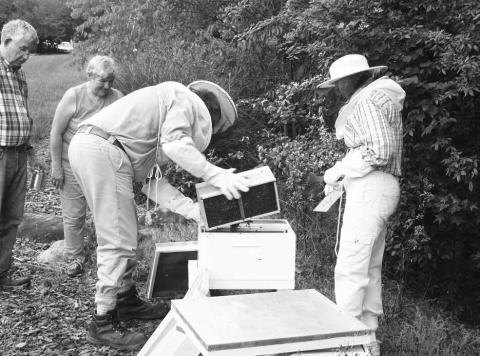 The Bats, Bees and Butterflies Service Committee has been on the move. What began in 2012 as a Bee Task Force with the charge of exploring ways to increase our bee population and improve garden productivity soon expanded its mission to include the protection of other threatened pollinators, especially butterflies. It is now a service committee, has a budget and works closely with the Landscaping and Grounds Advisory Committee. It recently added bats to its concerns — not for their pollinator potential but for their ability to reduce our mosquito population.

The first big project on the committee’s agenda for this year was re-introducing honeybees to campus. Three years ago a local beekeeper, with financial backing from Betty Grant, agreed to place and care for two hives of honeybees on the hill near the Grounds Building. Although the Farmer’s and Rotation Gardens enjoyed the benefits of greater pollination, the bees did not survive the winter. Because the beekeeper believed one of the problems was inadequate forage, the committee focused on increasing the supply of bee- and butterfly- friendly plants before trying to have hives on campus again. It planted native plants rich in nectar and pollen in the unassigned rows and plots in the Rotation Garden and provided seeds to residents to grow milkweed for monarch butterflies. Also, John Dorman of the Landscaping and Grounds staff took a beekeeping course. With the blessing of Tony Bayless, Director of Landscaping and Grounds, John agreed to help care for the bees when we again had colonies on campus.

Last fall a retired Chatham County beekeeper and Mike S., an Early Acceptance resident, donated hive boxes and other supplies to Carol Woods. The committee cleaned the equipment and sent it to the Apiary Division of the N.C. State Department of Agronomy in Raleigh for fumigation. This spring, Carol Woods resident Fred S. built a frame to support the hives and repainted the fumigated hive boxes. Nancy G. completed the process of preparing the boxes for occupation and setting them on the stand.

A cloudy and rainy April 28 was the move-in date for two boxes of Georgia honey bees. Chris Apple of the Orange County Beekeepers Association came to supervise John and Nancy as they installed the bees in their new homes. John and Nancy continue to care for these new arrivals. John has become so dedicated that he sacrifices time on his weekends to check on them. With such careful mentoring, these residents have adjusted more rapidly to their new surroundings than most of our two-legged newcomers. Now the 3B Committee will focus on bat houses with Barbara G. leading the way. Look for another update in the fall.